Godfall might look next-gen, but under the graphical gloss, it's a hollow experience

Beneath the polished surface, PS5's glitzy launch game proves to be a samey Dark Souls pretender. 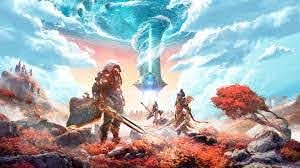 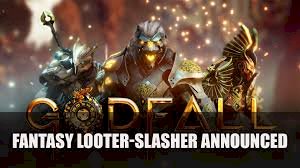 Godfall sure has some graphics. Five minutes into this self-proclaimed "loot-slasher" (ugh), it's clear why Sony decided to push it as the first showpiece game for PS5. Is Godfall all that interesting to play? Not really. But hoo-boy does it have that next-gen sprinkling of magic dust when it comes to passing The Eye Test.

So what exactly is Godfall? After a good few hours with it, I can tell you it's pretty damn derivative. There are smatterings of much better games wherever you look. A stripped down take on Destiny's loot and gear systems. The confident swagger of Dark Souls' combat, admittedly with much of the associated challenge all but neutered. A po-faced earnestness that you can just about get away with in a Call of Duty campaign, but certainly can't in a game where the playable character is a heavily armored dude who's trying to ensure the fall of his deity-like brother. Starting to see where that imaginatively named title comes from?

There's no denying how good it looks, though. I'm sure Godfall is a brilliant advert for the power of PS5—I didn't pre-order one in time, so Sony's new console exists to me purely as a hypothetical device. Yet no matter how pretty the console edition is, I'm confident the version I'm playing is prettier. Well, as long as you're cool labelling a game about high fantasy killers in silly armour bludgeoning monsters to death with pointy shields "pretty". 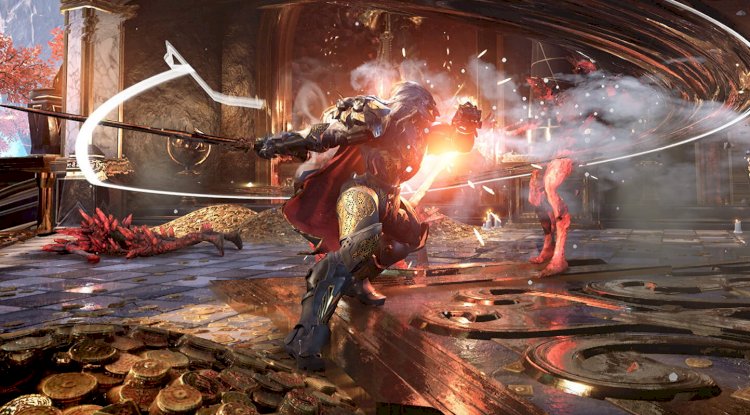 Played on an RTX 3080, paired with an Intel i9 10900k and 32GB of DDR4 RAM, Godfall is a knockout. With everything ramped up to the highest Epic preset, the action holds to a steady 4K/60 fps the vast majority of the time. Considering the level of the hardware involved, it really should. Slight hitches do occur during more frantic fights with multiple enemies—I've seen odd drops to the low 50s—but the game's motion blur is handled well enough that any stuttering is easy to overlook.

That said, I've come across a weird quirk trying to play Godfall on my Philips 4K OLED. Try as I might, I can't get the game to run properly in HDR. High Dynamic Range is enabled by default, and currently, there's no way to switch it off from the in-game menus. For some reason, my TV throws a tantrum when Godfall enables HDR, instantly downscaling the image to 1080p, despite the fact my display tells me the image is 4K.

After 20 minutes of fiddling with no success, I had to bite the bullet and play the game in windowed mode at 3200 x 2000. Considering Godfall's biggest selling point is its "LOOK AT ME, I'M NEXT-GEN!", being forced to play at compromised resolution is a slightly bitter pill to choke on. 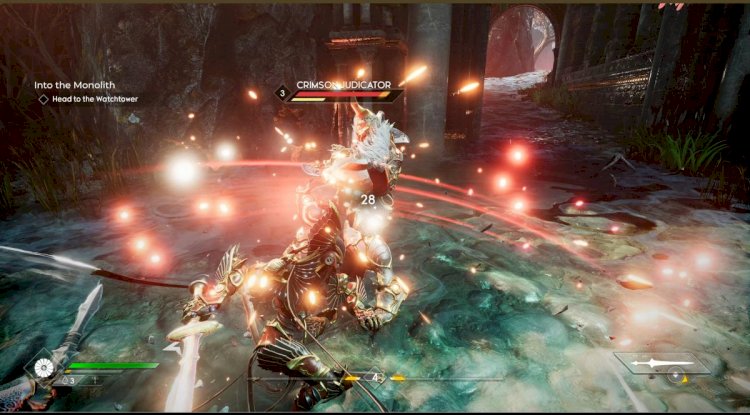 If Godfall looks like a next-gen game, it certainly doesn't play like one. Its third-person brawls try to mimic Dark Souls and Sekrio: Shadows Die Twice, but there's none of the nuance of From Software's masterful hack-and-slash adventures.

My talentless fingers rarely complain when games are too easy, but my digits will make an exception in Godfall's case. Not only can you sleepwalk through most fights, but even when you do bite it, death doesn't carry the penalty it should. Die midway through a boss fight, and you'll respawn in a nearby area, whereby you can instantly go back to hacking away at a big bad who's now missing a chunk of their health bar. It shows a lack of faith in players' appetite for a challenge.

In Godfall's defence, combat looks and feels pretty good. Yes, there's no getting away from its inherent shallowness—the core tenets of blocking, dodging and parrying can be mastered in minutes—but fights look the part in motion. Real talk: I love the dodge. It's a small detail, but the artful little animation as your sci-fi knight pirouettes out of danger is a lovely thing to behold. 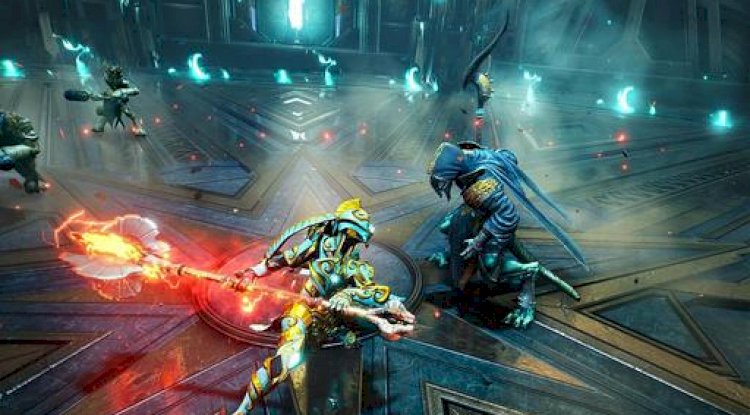 I wasn't expecting this going in, but the game Godfall most reminds me of is God of War on PS4—which you can enjoy on PC courtesy of the (admittedly not great) PlayStation Now. Apt, right? Be it the snug over-the-shoulder camera placement; the way you charge and throw a shield; how you open certain chests by finding and destroying three nearby artefacts; a fight-swinging supercharged state initiated by clicking both sticks on a gamepad. All of this speaks to a lack of imagination, yet like rebooted Kratos' brutal adventure, it's easier to ignore cracks in gameplay when the action looks this good. Although make no mistake—different genres aside, God of War is a much better game.

I'll touch on this more in our Godfall review next week, but there's a breezy accessibility to the game that means it's hard to fall for but also ensures it's undeniably easy to play. Suffer from a short attention span? Godfall's gorgeous tech and unfussy fights are perfect for those times when you can only be half bothered to focus on a game. Stick a podcast on, let your thumbs twiddle away, and it's hard to be offended by Godfall.

Does that justify a $70 purchase? Not at all. But the combination of stellar graphics and bristle-free gameplay has a certain charm. A final thought that I can't help feel guilty for contemplating: It's kinda nice to play a game that looks good enough to semi justify dropping the thick end of a grand on an RTX 3080.